What the Heck is PRUV? | Vancouver, WA Photographer

What the heck is PRUV, this is a question I found myself asking a lot a few months ago. PRUV stands for persistent right umbilical vein, it is a vascular pathology found in babies while in utero. Essentially there is a vein in the belly that directs the blood flow through a fetus, normally the right umbilical vein begins to obliterate around the fourth week of gestation and disappears by the 7th week. In a baby with PRUV the right vein remains open through gestation affecting the way that blood courses through the fetus. This condition pretty rare occurring roughly in 0.1% of pregnancies and is generally diagnosed by ultrasound in the second trimester around the 20th week. It is associated with developmental problems in organs in the renal system and the heart, it is also common for babies with PRUV to be born low birth weights and can be seen in correlation of other conditions such as Single Umbilical Artery.

Back in December my husband and I went in for our second trimester ultrasound. We were elated to have another look our little man find out what we were having but we left our appointment feeling a little scared and unsure. You can read more about this experience in my previous blog post HERE. Because of the rarity of PRUV there was some confusion as to what was acutally going on at first and initially we were informed that our little guy had SUA and that they were going to need to monitor his condition through my pregnancy.

I developed a kidney stone back in January and needed to make a trip to the hospital because of it. While in the hospital we mention to the ultrasound tech that Parker had SUA but when she went to look into it she saw a normal umbilical cord. After a little more digging and referring to another doctor in the hospital we finally found out that Parker actually had PRUV. This is where things got really interesting, no one seemed to really know what PRUV was and didn't know how to describe it other than to that it could cause problems with his heart. At our ultrasound back in December they had us set up an appointment for an Echocardiogram at 6 weeks out. At the time of my kidney stone we were still about 2 weeks from the echo so of course when I got home and had some time I started searching the internet for more info but was really coming up empty handed. About the only thing I knew for sure was that PRUV was less serious than SUA, so that was a bit of a relief.

At the first echo they saw an abnormality on Parker's inferior vena cava. They didn't have much else to tell us, they just wanted us to come back in for another echo when his heart got a little bigger and they could see things a little clearer. We were still kind of in the dark at this point.

At our second echo we FINALLY got some answer. We had a fantastic tech who actually had seen cases of PRUV in the past and was able to really explain it to us. The doctor stood in while the tech was doing the echo portion of our ultrasound and was able to tell us right away that our little man's heart was looking normal and healthy! So much weight was lifted off of me at that appointment. I finally felt like I understood what was going on with Parker and I knew his heart was healthy. His femur was measuring in the 2nd percentile so they wanted us to come in for another ultrasound just to take another look at his growth but at this point they were feeling pretty confident about his health. 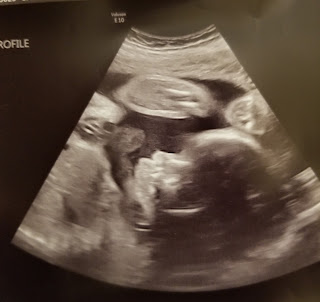 A snap from our 28 week ultrasound. Parker is head down and tacoed up with his feet in face.

Yesterday was our 32 week ultrasound and likely will be our last. His femur is still measuring very short but there are no other signs of genetic abnormalities, he weighed in a just over 4 pounds and is in the 40th percentile for his gestational age. He is growing well and so there is no longer any real concerns about his health or prognosis. We are looking at having a totally normal, healthy and short (just like his momma) baby here in just a few weeks.

Thank you to everyone who has been following our story and has been showing us all the support and love. There were moments that were definitely a little scary but knowing how loved we all are made it so much easier to be positive through the whole experience and I truly believe that the positive attitude we maintained made all the difference in the world when it came to Parker's prognosis.

Not all cases of PRUV result in complications, in fact according to a specific study only about 60% of cases delivery was unremarkable and post-natal evolution was favorable. We are so lucky to be in that 60%
Additional information on PRUV can be found at these sites;
https://sonoworld.com/
https://onlinelibrary.wiley.com/
https://www.sciencedirect.com/ 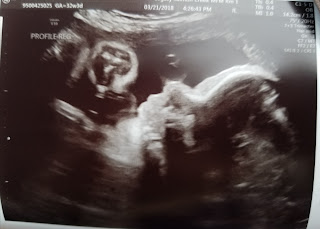 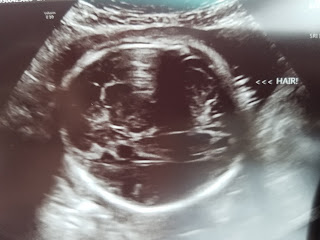 Here are a few snaps from our 32 week ultrasound. Parker is still positioned head down and seems to enjoy being tacoed over, he never seems to take his legs out of his face. His position has made it hard to see much of his face our last 2 appointment but he already has some hair and we were able to get a little peek of it so that was awesome. We are so excited to meet our little man this May and so happy to know that he is growing healthy and happy in my belly.
Posted by brianna barnes photography at 12:59 PM No comments: